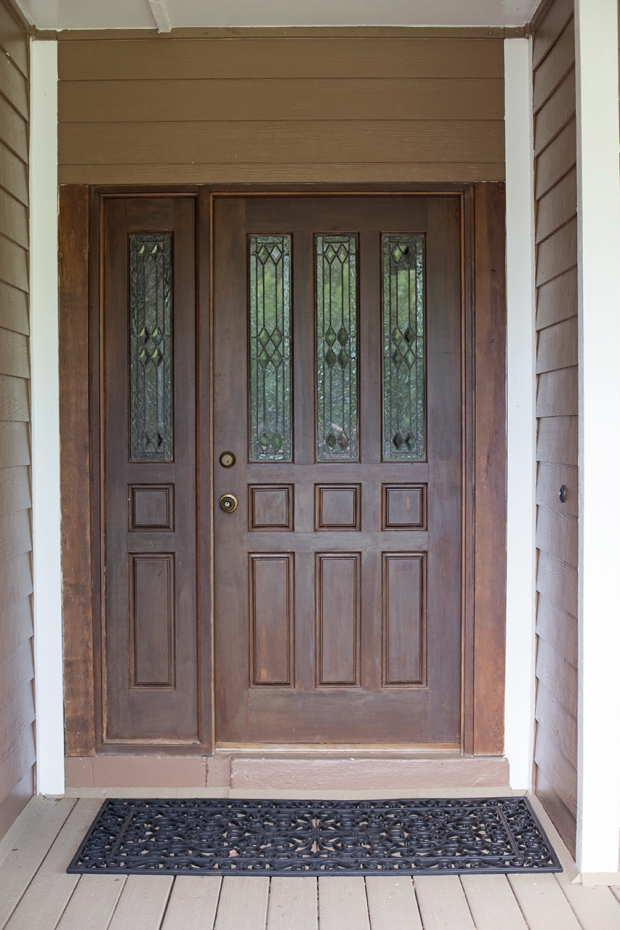 Even though this door is old and has a lot of wear I still think it’s really beautiful. The door is brown like our siding and I always felt sad that it didn’t stand out. We really wanted the door to be seen so we decided to give it a makeover. There’s lots of fun colors that I like for doors but we chose to go with a color that would compliment the brown siding. Instead of going with a crazy fun color (sorry lime green and canary yellow) we decided to play it safe and go with a classic red front door.

We headed over to Lowe’s and picked up Valspar’s Duramax (Exterior/Semi-Gloss) in the color Heirloom Red. 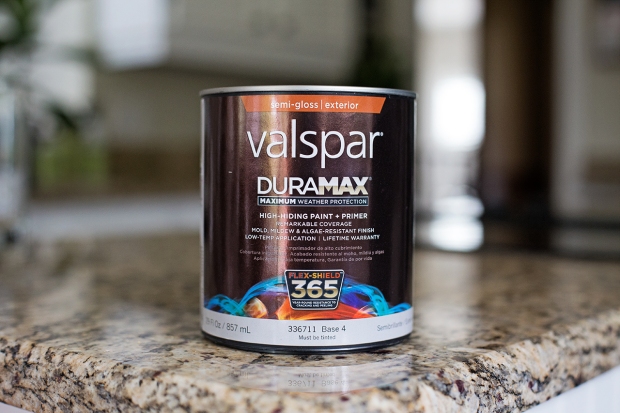 We left the door on its hinges and J painted the door from inside the house. He used a brush to cut all of the edges and a roller for the rest of the door.

Here’s the door prepped and with 1 coat of paint: 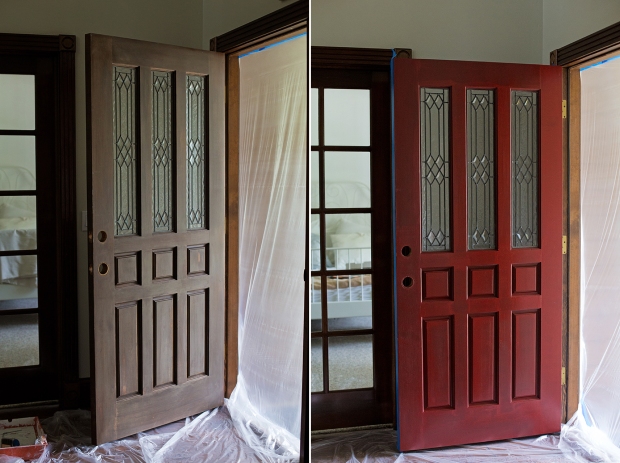 J lightly sanded between the first two coats of paint before applying the third and final coat. Once the paint dried he was able to install the new door hardware that we ordered from Build.com

The following day J headed outside to prime the door frame and sidelight before painting. He used Kilz Premium No Voc Primer. 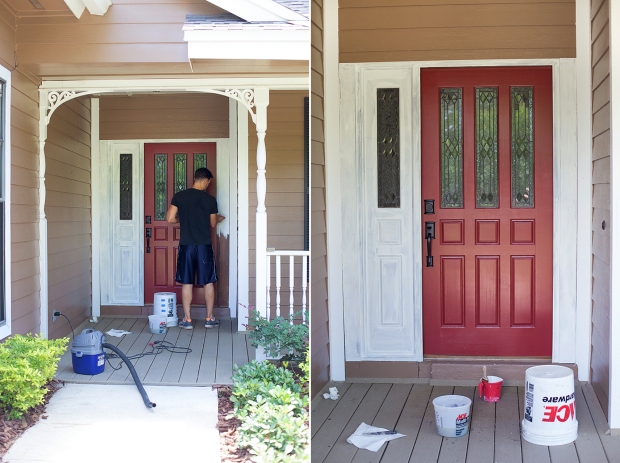 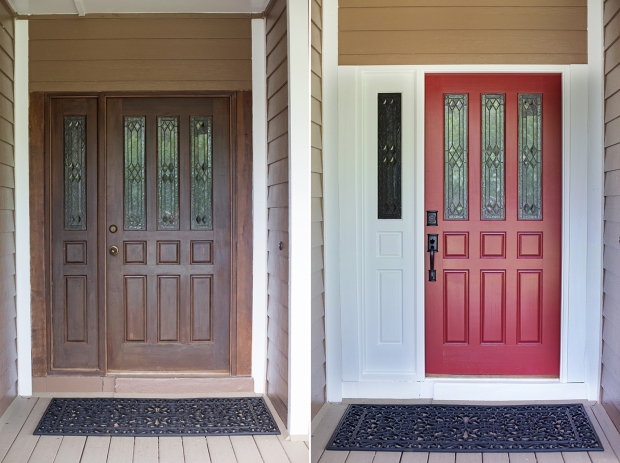 I’m SO glad we painted the door. Now the entry to our home looks cheerful and bright. Isn’t it much more welcoming with some color?

We still have some landscaping to do in the front as well as new lighting and front porch decor. I really want our home to feel welcoming from the curb and little by little I think we’ll get there. Adding some flowers and a place to sit are at the top of my list. What have you done to make your home feel more welcoming?

The exterior of our house was painted brown and it’s not a color that we would have picked. The Hardie Siding is only a few years old and having the entire exterior re-painted would be pretty expensive so for now we’re living with the color and trying to add some of our personality and curb appeal in other ways.

To keep things consistent we decided that all of our window treatments in the front should match. Our favorite window treatments are plantation shutters and after having a set installed in our playroom/office we went ahead and ordered them for the rest of our front windows. The plantation shutters were a splurge but we think that they’re a good investment and they’ll definitely be enjoyed – we LOVE them and can’t wait to have the rest installed in a few weeks! In the meantime we’re living with paper shades and the window treatments left by the previous owners.

The wood shutters on the exterior of the house were painted white but we felt that there needed to be some contrast between the windows, the window frames and the exterior shutters. The trim of the house and our two front porches are also painted white. We love that the house has big windows and pretty porches but because everything but the siding was painted white nothing felt defined and everything was blending into each other. Choosing a color to compliment the brown siding was difficult so in the end we decided to keep things simple and go with black. We’re going to save pops of color for the front door, the landscaping and the porch decor.

The shutters were previously painted with Valspar paint (the leftover paint was in the garage) so we headed over to Lowe’s to choose a new color. We went with Valspar’s Reserve Paint + Primer with HydroChroma Technology in the color Lincoln Cottage Black/Satin Finish.

Before J started painting he power washed all of the shutters and then gave them a quick blow dry with his shop vac. Once the shutters were completely dry he was able to start painting them. We thought it would be an afternoon project but it ended up taking about two full days for J to apply 2 coats of paint to all of the shutters without my help. 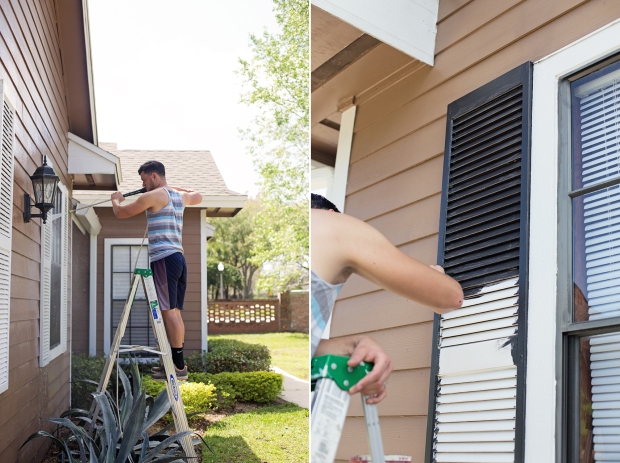 Painting the shutters started a chain reaction and we ended up pulling out some landscaping that we’ve been wanting to replace (a friend scored a bunch of blue agave) and we removed the corbels from the front porches for a cleaner look.

Here’s a peek at the difference between white and black shutters. Painting the shutters definitely gives the windows more definition and it helps the front porches stand out instead of blending in. 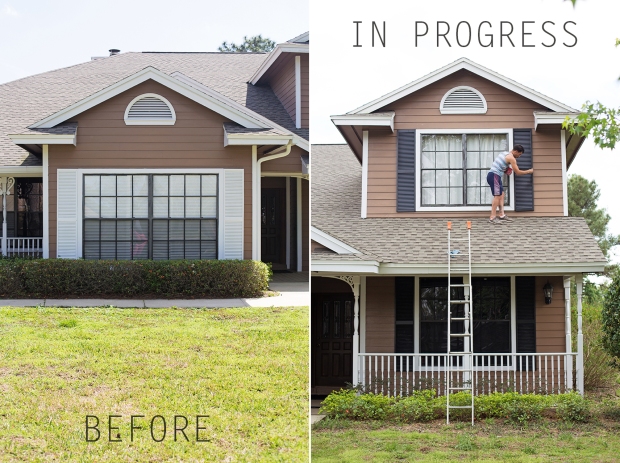 Next up will be the landscaping. We started scouting the neighborhood and the local nursery to get some ideas and we’re set on painting the front door a fun color. Can you guess what color I’m thinking? In a few weeks we can say goodbye to the paper shades & curtains and all of our front windows will have plantation shutters installed. Yay!

We’re hoping that as the spring turns to summer all of these changes will help improve the curb appeal of the house. I’m most excited to paint the front door and accessorize the porch. Patience is a virtue right?

So has Spring gotten you in the mood for outdoor projects too?

Having a family room that’s open to our kitchen was a MUST on our checklist when searching for a new home. Our last home didn’t have a sight line between the two rooms so we were really happy when we saw that this house has the layout we were looking for. When I saw that the family room also had two beautiful french doors flanking a two story fireplace I was pretty much sold.

The family room has a cozy feel but there’s also a grand 20 foot ceiling. We definitely had some concerns about how we’d reach the ceiling, the walls and the second story windows ourselves but we didn’t let that stop us from making an offer on the house.

This is what we saw on the day we viewed the house: 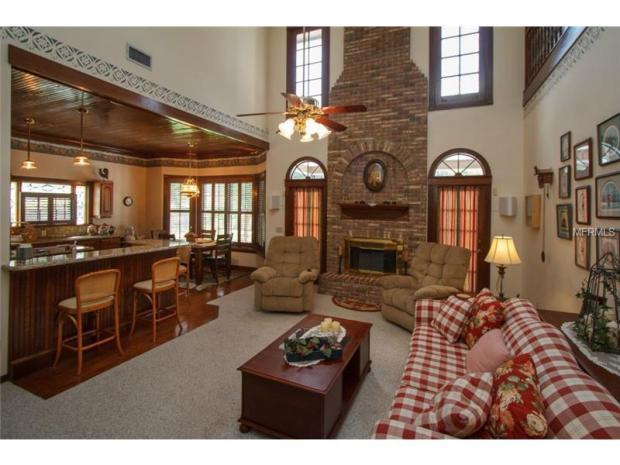 We gave ourselves a little over 2 months to complete as much work as possible in the house before moving in but because the work in the kitchen took a lot longer than we expected we got a late start on the family room. The pressure was on. The guys had a 20 foot ceiling to contend with as well as a bunch of woodwork that needed prep work before painting.

We were running so short on time that we considered hiring a painter but in the end J and his Dad decided to complete the work in the family room like we had originally planned. J called around to get some quotes for a 12 foot scaffolding and a few days later he picked one up from Sunbelt Rentals.

Watching J and my father-in-law assemble the scaffolding was scary but once they got it together I felt better about them using it. Sorta. 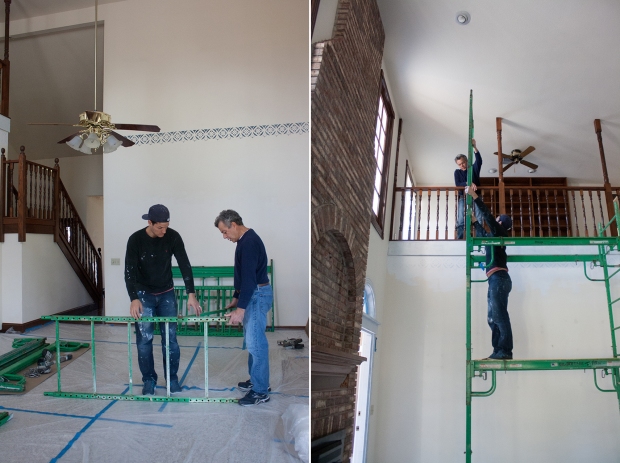 The family room has 2 windows and 2 french doors that needed sanding, priming and painting. Everything was sanded down using medium grit sanding blocks and/or a palm sander. All of the woodwork was cleaned with Krud Kutter Degreaser followed by Krud Kuttler Gloss Off prior to priming with Kilz Premium No Voc Primer. After two coats of primer and a good caulking the woodwork was painted with Benjamin Moore’s Natura in the color Simply White/Semi Gloss. We have an entire house full of dark wood trim and this is the process we’ve been successfully using on all of it. 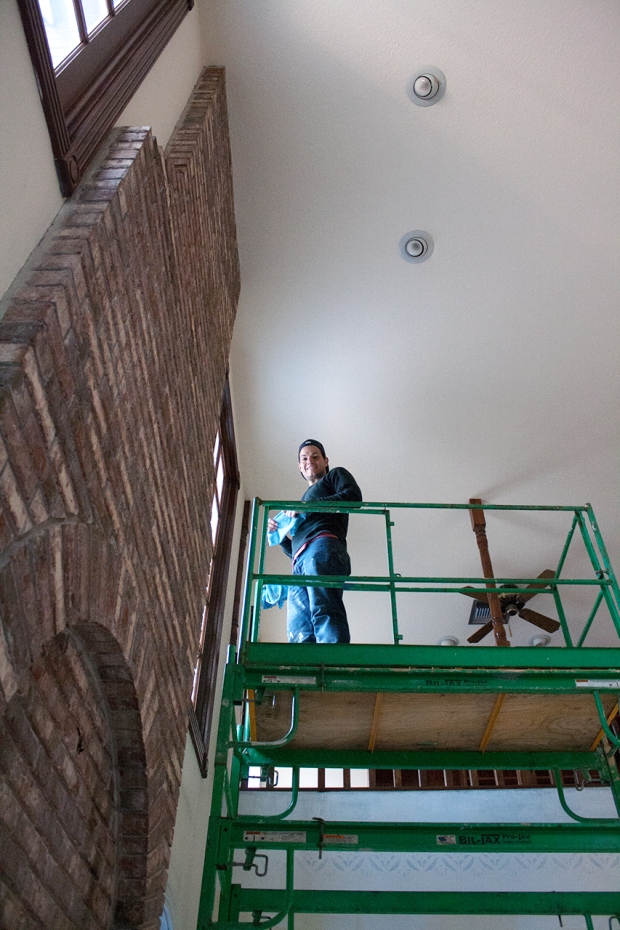 There was also a painted border that needed priming before the walls could be painted and the ceiling needed two coats of fresh white paint  (we’ve been using Benjamin Moore’s Natura in the color Simply White/Flat Finish for all of the ceilings in the house). Once all of the woodwork was painted and the ceiling and priming were complete the guys were finally able to start painting the walls. We chose the same color as our kitchen – Benjamin Moore’s Natura in the color Overcast/Flat Finish.

There’s no way this job could have been completed without the scaffolding.

J also used the scaffolding to put up a new ceiling fan. I originally wanted to put up a pretty light fixture but having a ceiling fan in the family room seems to be more practical for Florida living. The fan we chose does not have a light kit so J installed 2 extra recessed light fixtures opposite the existing ones above the fireplace. Adding the 2 extra recessed lights (with a dimmer) in the room gives us the perfect amount of light at night.

We purchased the family room ceiling fan at Home Depot. It’s the Altura Oil Rubbed Bronze 68 inch Ceiling Fan from the Home Decorators Collection. We chose to hang our fan on a 6 foot pole. 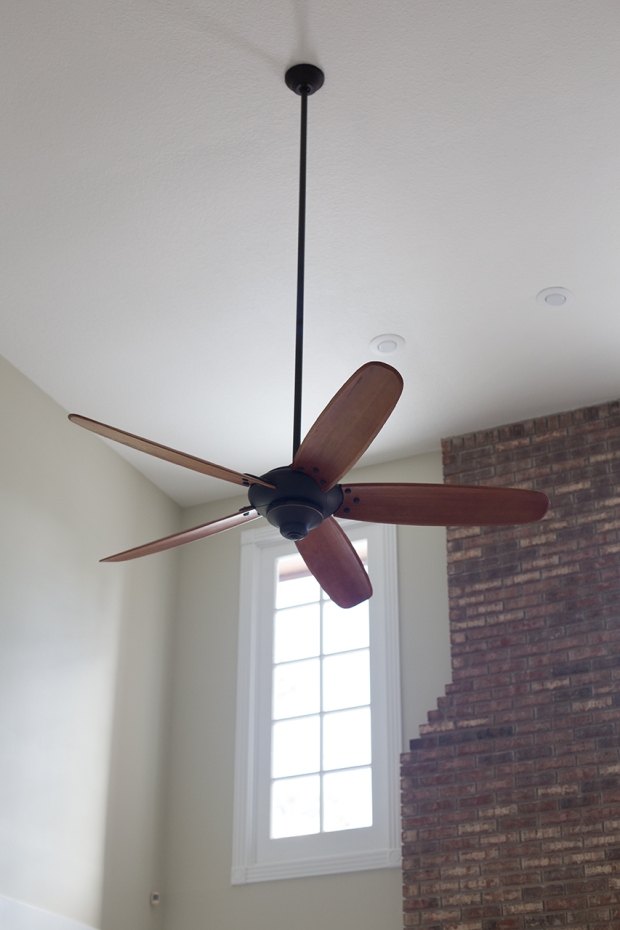 I really love how the windows look now that they are painted white. The room feels so much brighter. I’m also loving the paint color we chose – it’s a really soft color and I love how it changes throughout the day. Overcast is part of Benjamin Moore’s Off White Collection and at first I was afraid it might be too light but it’s perfect. The color will also continue into our foyer and loft and I can’t wait to see how it looks when we get around to working on the stairs and railings. 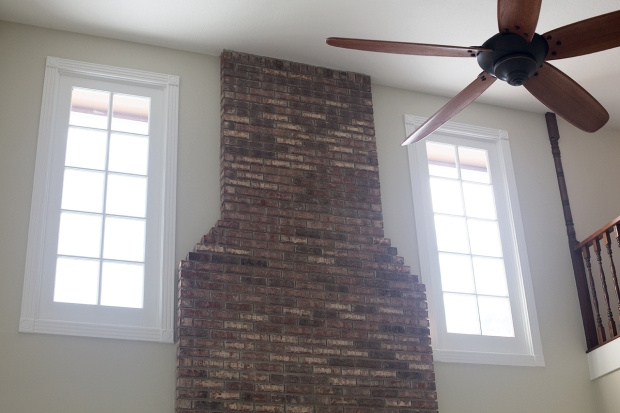 Other things to help spruce up the room before move in were 7 inch baseboards and new hardware on the french doors. We purchased new hardware for all of our interior and exterior doors from Build.com We chose Kwikset’s Ashfield Collection in the color Venetian Bronze. 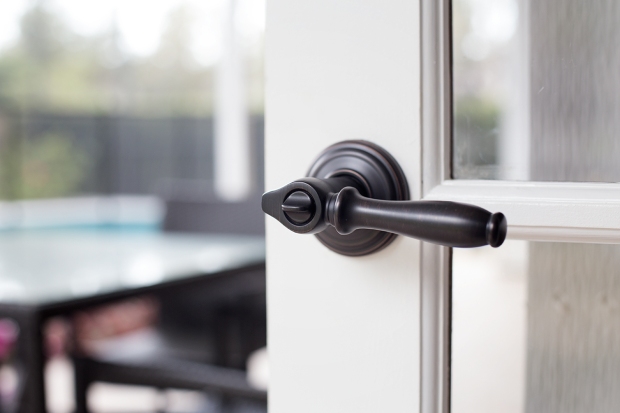 J spray painted the brass fireplace doors with Rustoleum’s High Heat Ultra Spray Paint for a quick update. We’re still undecided on what we want to do with the fireplace and mantle so we’re leaving them be for now. 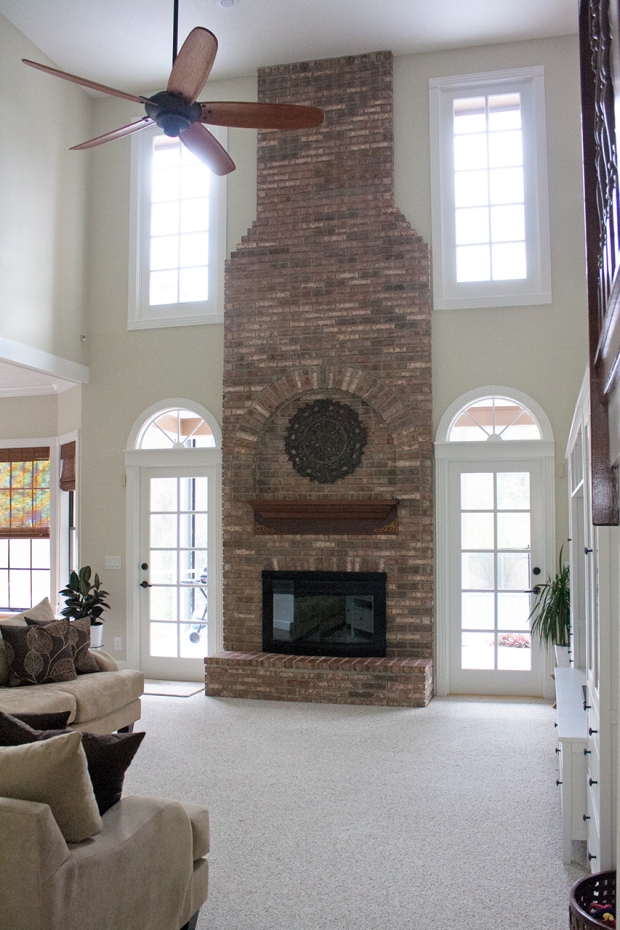 We’re also feeling indecisive about the family room couches. We aren’t exactly sure what we want long term for the space so for now we chose to bring in a set that we had in the upstairs loft of our old house. The couches are actually from our very first apartment together which makes them 10 years old! I still can’t believe that we’ve been living together for that long!

We also had a newer sectional but since its configuration didn’t fit the space well we decided to sell it. The couches we kept are in pretty good condition and should feel like new once I give the back cushions a good re-stuffing. I’m even thinking about changing out the legs. We figured it was better for us to keep the old couches until we know exactly what we want for the space instead of rushing into buying something new. The thought of “new” scares me now anyway since we have a dog, toddler and another baby on the way! I’m thinking that with a little bit of work and accessorizing we can bring the old couches back to life.

Luckily our Little Duck doesn’t seem to mind them the way they are for now :) 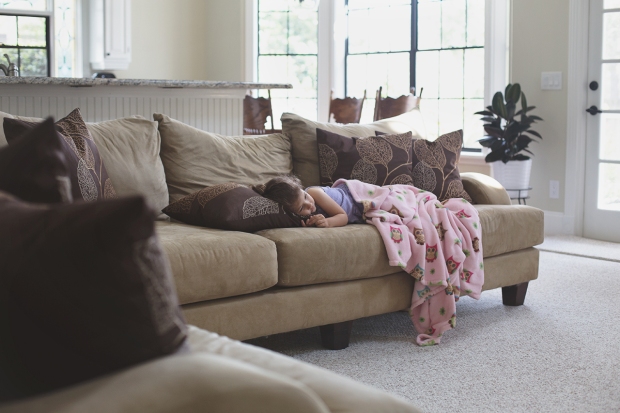 The family room still has a long way to go but we’re really enjoying living in our new space. The layout has been perfect for the way our family likes to function and I especially love that we’re able to cook and clean in the kitchen while still being a part of the action. Eventually we’ll start personalizing the space but for now we’re just glad to have the bones of the room complete!